Up to 700 trapped in Syrian Kurdish town of Kobane, UN says 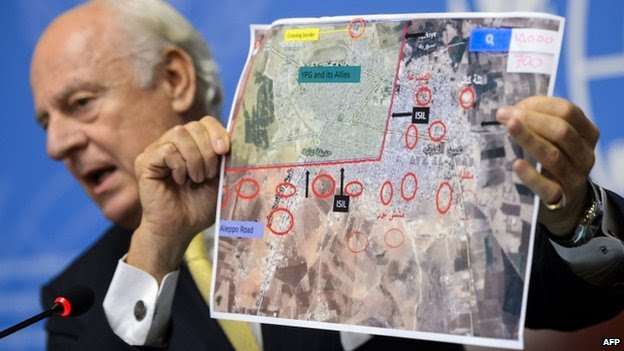 The UN special envoy to Syria has warned that up to 700 people, mainly elderly, are still trapped in the Syrian border town of Kobane.
Staffan de Mistura also urged Turkey to allow in volunteers to Syria to defend the town from Islamic State militants.
There are reports that IS has taken control of the Kurdish headquarters in the town, but this has been denied by a Syrian Kurdish official there.
Kobane has been a major battleground for IS and the Kurds for three weeks.
The fighting has forced hundreds of thousands of Syrians, mainly Kurds, to flee into neighbouring Turkey, which has so far ruled out any ground operation on its own against IS. 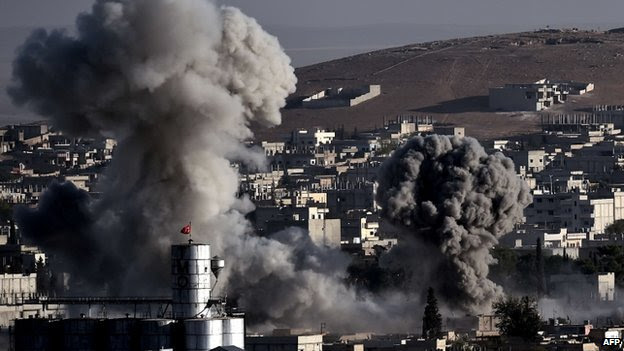 Kurdish forces, who are being helped by US-led coalition strikes against IS, say they urgently need more weapons and ammunition to push back the militants' advance in the town.
The US Central Command (Centcom) said that US fighter jets alongside UAE and Saudi Arabian military aircraft carried out fresh airstrikes on Thursday and Friday around the southeast of Kobane and in Deir al-Zour, in eastern Syria, destroying several IS vehicles and training facilities.
Kurdish sources inside Kobane told the BBC that four air strikes hit the western side of the town in one half-hour period.
'No Srebrenica'
Except for one narrow entry and exit point, Mr de Mistura said Kobane was "literally surrounded" by IS, with hundreds of mainly elderly civilians still inside the city centre and another 10-13,000 gathered nearby, AFP reports.
He said the civilians would "most likely be massacred'' if the town fell to IS, warning that the UN did not want to see another Srebrenica - where thousands of Muslim men and boys were killed by Bosnian Serb forces in 1995 during the Bosnian conflict. 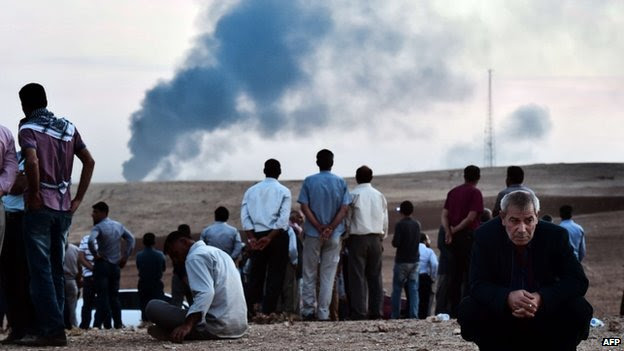 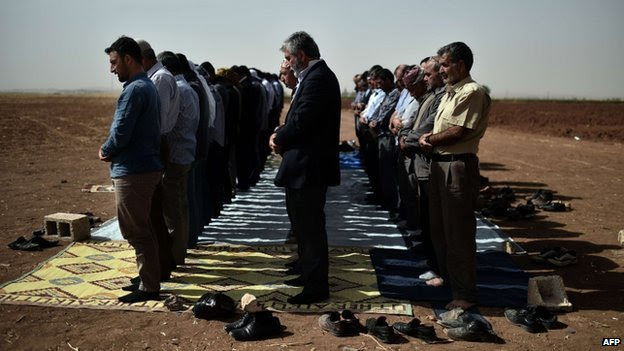 "We would like to appeal to the Turkish authorities in order to allow the flow of volunteers at least, and their equipment to be able to enter the city to contribute to a self-defence operation," Mr de Mistura said, addressing reporters in Geneva on Friday.
He also urged Turkey to support the US-led coalition in carrying out air strikes on IS targets around Kobane "through whatever means from their own territory".
But the vice chairman of Turkey's governing AK party, Yasin Aktay, told the BBC on Friday that all of Kobane's civilians had left the town and were already in Turkey.
"There is no tragedy in Kobane as cried out by the terrorist PKK [Kurdistan Workers' Party]", he said. "There is a war between two terrorist groups."
Turkey is reluctant to get involved militarily, partly because it is concerned about arming the Kurdish forces who are fighting the IS militants. Turkey fought a long civil war with its Kurdish minority.

A Syrian Kurdish source inside Kobane has denied reports that IS has taken almost complete control of the town's "security quarter" - where the Kurdish civilian headquarters are based.
The source told the BBC that Kurdish fighters remained in control of two administrative buildings in the east of the town, saying that "heavy fighting has reached the 'security quarter' but it has not fallen yet".
Earlier, the UK-based Syrian Observatory for Human Rights said the jihadists had seized the main headquarters of the Kurdish military and civilian authorities.
"IS now controls 40% of the town," the monitoring group's director Rami Abdel Rahman told AFP news agency.
Turkey has been granted parliamentary approval for possible military action, allowing it to launch an offensive into Syria and Iraq against militants who threaten Turkey.
But while Turkish tanks are stationed along the border, there has so far been no move by Turkish forces into Syria.
Pro-Kurdish protesters have ramped up the pressure on the Turkish authorities to do more to save Kobane in recent days. Interior Minister Efkan Ala says more than 30 people have been killed in clashes with police in several Turkish cities this week. 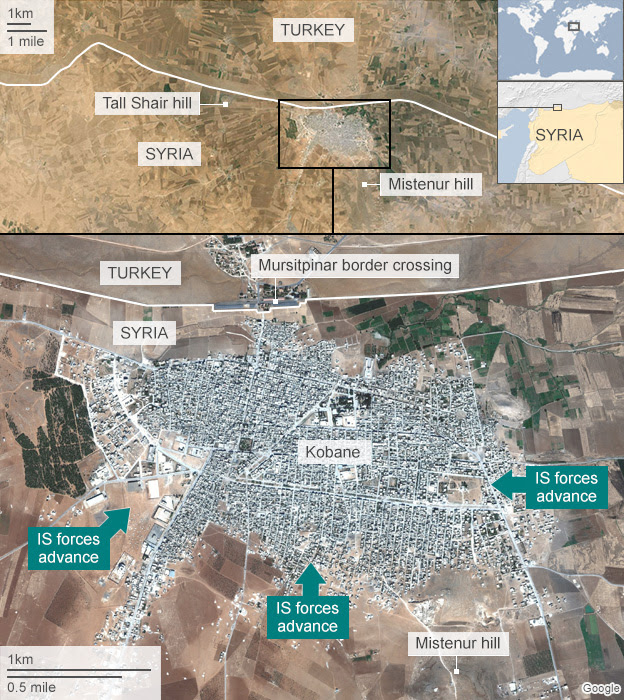