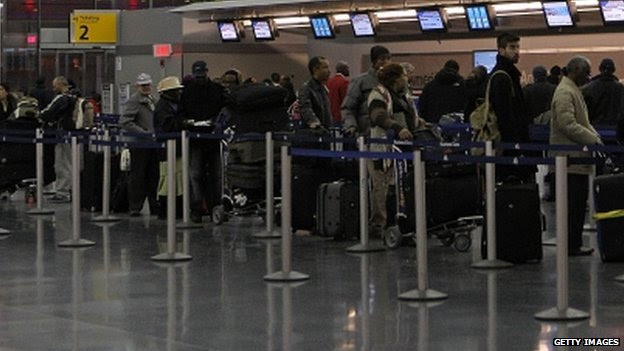 Screening measures will include checking passengers for high temperature
Continue reading the main story
New York's JFK airport is to start screening to try to stem the Ebola outbreak that has killed more than 4,000 people.
Passengers from Liberia, Sierra Leone and Guinea - the worst-hit countries - will have their temperatures taken and have to answer a series of questions.
Checks at O'Hare in Chicago, Newark, Washington's Dulles and Atlanta's airport will begin in the coming days.
This comes after the first person died of Ebola in Texas on Wednesday.
Thomas Duncan had travelled to the US from Liberia, and was only diagnosed with the disease once he arrived in Dallas.
The latest figures released by the World Health Organization show the number of deaths attributed to the the haemorrhagic fever has risen to 4,033.
The vast majority of the fatalities - 4,024 - were in the West African nations of Liberia, Sierra Leone and Guinea.
In other developments:
'Simulated patients'

The screening measures at JFK are starting on Saturday, with border agents checking for signs of illness such as high temperatures. 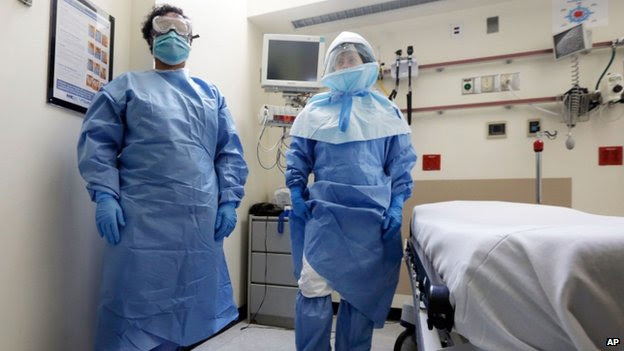 New York's authorities say the city is "particularly well prepared"
Passengers from the three African nations will also be asked about their travel details before leaving for the US and also if they have been in contact with anyone suffering from Ebola.
If they answer "Yes" to any questions or are running a fever, a representative of the Centers for Disease Control and Prevention (CDC) will intervene and provide a public health assessment.
Factsheets will be distributed to travellers with information on symptoms of Ebola and instructions to call a doctor if they become ill within three weeks. 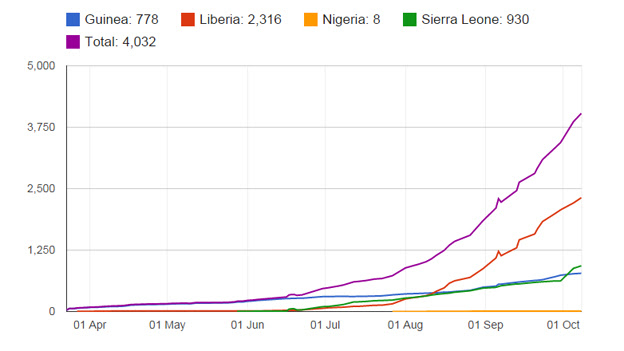 Source: WHO
Note: figures have occasionally been revised down as suspected or probable cases are found to be unrelated to Ebola. They do not include one death in the US recorded on 8 October.

JFK and the four other airports account for 90% of air travellers arriving in the US. As many as 160 people enter the US from the worse-affected countries each day.
"There is no cause for alarm," New York Mayor Bill de Blasio said earlier, adding that the city was "particularly well prepared".
"Physicians, hospitals, emergency medical personnel are trained in how to identify this disease and how to quickly isolate anyone who may be afflicted."
To test the readiness of New York, people pretending to display Ebola symptoms - the so-called "simulated patients" - have been walking into hospital emergency rooms to see if there were any weaknesses in the new system.
Publicat de Unknown la 23:32