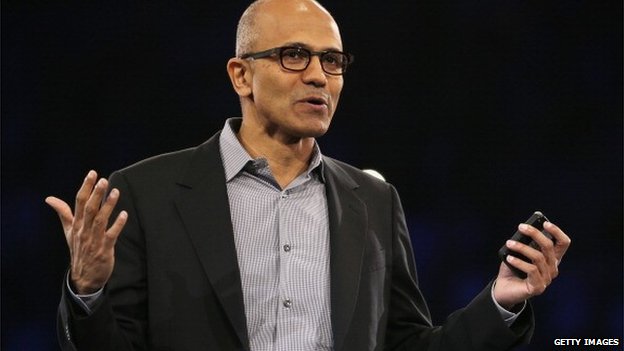 The boss of Microsoft, Satya Nadella, has apologised for remarks he made advising women not to ask for a pay rise but to have "faith in the system".
At a conference to celebrate women in technology, he suggested that women not asking for a rise was "good karma".
The comments sparked outrage and Mr Nadella has now apologised.
In an email to staff, he said he answered the question "completely wrong" and "wholeheartedly" supported programmes to close the pay gap.
At the conference, called the Grace Hopper Celebration of Women in Computing, he said: "It's not really about asking for the raise, but knowing and having faith that the system will actually give you the right raises as you go along.
"Because that's good karma. It'll come back because somebody's going to know that's the kind of person that I want to trust," he said.
'Inarticulate'

The interviewer at the event, Maria Klawe, president of Harvey Mudd College and a Microsoft director, immediately disagreed with him. Instead, she suggested women do their homework on salary levels and then practise asking for pay rises.
The comments caused a furore on Twitter and Mr Nadella later tweeted that he was "inarticulate" in his answer about how women should ask for a pay increase.
That was then followed up with an email to staff in which he said: "Maria asked me what advice I would offer women who are not comfortable asking for pay raises. I answered that question completely wrong.
"Without a doubt, I wholeheartedly support programs at Microsoft and in the industry that bring more women into technology and close the pay gap. I believe men and women should get equal pay for equal work.
"And when it comes to career advice on getting a raise when you think it's deserved, Maria's advice was the right advice. If you think you deserve a raise, you should just ask."
Indian-born Mr Nadella became chief executive earlier this year, taking over from Steve Ballmer.
Publicat de Unknown la 09:47