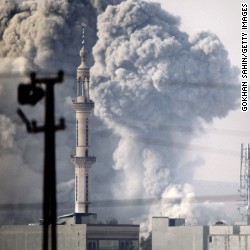 Islamic State fighters surrounded one of Iraq's largest air bases Tuesday, a police captain in Iraq's Anbar province and other security sources told CNN. The militants are preparing to launch an attack on Ein Al-Assad military airbase, which is halfway between Hit and Haditha, said Anbar police Capt. Omar Mohamad Hanin.
Anbar province has been largely overrun by ISIS, which has been waging war for months in order to establish a caliphate -- or a society run by strict Sharia law. It has also taken over large swaths of Syria, near the border with Turkey.
Coalition forces have been trying to battle back, but ISIS is getting into position in Iraq with rocket launchers and tanks in villages to the south and east of Ein Al-Assad, Hanin said.

Four people were killed and 12 others were injured when a car bomb being driven by a someone on a suicide mission exploded in an area called al-Utayfia. The target was a security checkpoint at one of the entrances to the predominately Shiite neighborhood, police officials told CNN.Two deadly car bombs exploded in Baghdad on Monday and one on Tuesday. The militants claimed they were behind the blasts. One targeted the Iraqi police checkpoint in the Shia neighborhood of Khadimiya in the northern part of the Iraqi capital.
ISIS released a statement on its media site claiming that the al-Khadimiya attack killed a member of the Iraqi parliament, Ahmad al-Khafaji, who was a member of the Badr Organization, a main Shiite bloc in the government.
ISIS advances in Syria
In Syria Tuesday, ISIS fighters bombed and blasted their way through the strategic city of Kobani. Columns of smoke rose as the sound of gunfire erupted.
The United States and its allies launched one airstrike Monday in Iraq.
But coalition airpower -- aided by Saudi Arabia -- has been focused intensely on Syria. U.S. Central Command said Tuesday that it had bombarded ISIS near Kobani, using bomber and fighter aircraft to fire 21 airstrikes that destroyed two ISIS staging locations, a building, a truck and two vehicles and damaged other ISIS property.
Another U.S. strike near the Syrian city of Dayr az Zawr struck a modular oil refinery and initial indications are that this strike was successful.
The strikes are meant to prevent the extremist Muslim group from resupplying and massing combat power on the Kurdish held portions of Kobani, Central Command said in a release.
All coalition aircraft used in missions against ISIS departed the space safely, the military said, and analysis of the strikes suggests that they slowed ISIS' advance.
But Central Command warned that "the security situation on the ground there remains fluid" with ISIS attempting to gain territory and beat back the Kurdish military, which is putting up a fierce fight.